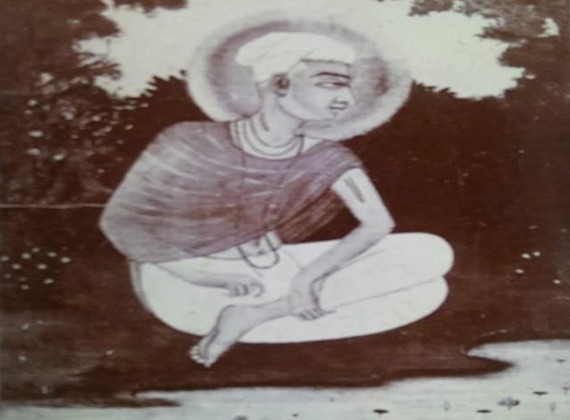 The appearance of Lord-Krishna, the reincarnation of the almighty with complete sixteen-Kala Avtar with his Divine-love consort’s Sri Radha more than five thousand year age in Brij-India is a well-accepted fact of life by the people of India and not a mere legend of Historians.

In the lap of nature, in Vrindavan with its cluster of forests and meadows surrounded by the revered river Yamuna, the almighty mingled with the people of the land, making on the destination of caste and creed. The purest form of divine love play with Sri Radha displayed by him opened up the most secluded, rarest, and the super most path of Ras-Bhakti, hitherto unknown to the world.

The forces of creation and sustenance, in effect Mother Nature herself, reincarnated around Him as Sri Radha, and her companions. Lord Krishnas haunting flute sweetest melodies was the call of God and followers happily abandoned worldly attachments to serve God and joy in this garden of nature.

Founder of the Shri RadhaVallabh Sampraday  was His Divine Grace Goswami  Shri Hit Harivansh Mahaprabhu ji . His father, Shri Vyas Mishra,was a Gaur Brahman of Devaband in Saharanpur district of Utter Pradesh, who was in service of the Moghul Emperor Humayun, according to Tarikh-I-Deoband (Syed Mehbub Rizvi, IImi-Marqaz, Deoband), On one occasion while Shri Vyas Mishra was accompanying Emperor on his march from Agra, his wife Tara, gave birth to a son at the Royal Army Camp at Bad, near Mathura on 11th day (Ekadashi) Monday of in the Samvat 1530, In grateful recognition of their answered prayers, the parents named the child after the God they had invoked, and called him Hari Vansha, i.e. Hari's issue. The Emperor celebrated birth with pomp and splendor heralding the incarnation of sacred flute of the Lord. Gulbadan Begum, sister of the Emperor in her book "Humayaunnama" (preserved in Gulistan Library at Tehran, capital of Iran) and Zauhar Aftabchi in his book "Tazkirat-ul-Wakiat" had described in detail that how for ten days there were festivities celebrated, profuse Lightings' fireworks, feasts, etc., continued during this period. The Emperor, his Queen Mariam Makani, his sister Gulbadan Begum, prominent courtiers Beiram Khan, Tardi Beg, Yaqoob Beg, Zauhar Aftabchi, Dost Baba, Khoja Amber, etc. sent gifts and greetings to Pt. Vyas Mishra, Alme were given to beggar sand gifts to courtesans. One part of the Royal caravan was staying at Jamalpur Serai, three 'Kos' away from Bad on Agra-Delhi Road, where also festivities in the honor of Hit Harivansh Mahaprabhu were celebrated on large scale for ten days supervised and managed by Abdul Majeed, the then Dewan of Mathura at the Royal expense. Bu the order of Emperor, all the inmates of Royal caravan abstained from alcoholic drinks and non-vegetarian food during this period.

o mark the serenity of the occasion, the Emperor ordered that in future Royal Armies should not camp at Baad; instead Farah was declared camping ground.

Hit Harivansh Mahaprabhu passed his childhood at Deoband. Once playing with his playmates the ball fell in a deep well. Mahaprabhu jumped into the well and came out with a Shri Vigraha (Lord's idol). This well still exists and Idol installed in the ancestral palace, at Deoband widely known as Shri Radha Navarangilalaji. Here at Deoband, once whiles asleep, Shri Radha gave Her Holy 'darshan' (audience) in dream to Hit Harivansh Mahaprabhu and blessed Him with 'Mantra' (Holy couplet) under a people tree. This tree still exists at Deoband in the precincts of temple.

When he had grown up, his Yagyapaveet (Sacred Thread) ceremony was performed, and later he was married to Rukmini Ji, determined to abandon the world and lead the life of an ascetic. At that time he was 32 with this resolution he set out on the road to Vrindavan and had reached Charthawal, near Muzaffarnagar. Here at night he received in a vision while asleep at night Divine command from Shri Radha, that "you will meet a Brahman who had got My Icon. Take this Icon to Vrindavan to worship as also to marry his two daughters."She (Shri Radha) gave a similar dream to Atmadeva Brahman. Next morning Hit Harivansh Mahaprabhu was married at a simple but solemn ceremony and the icon, named RadhaVallabh gifted to him.

Ancestor of Atmadeva Brahman had performed penance at mount Kailasha worshipping Lord Shiva. Lord Shiva became pleased and insisted too much upon ancestor of that Atmadeva Brahman to be blessed with his desired wish. Then he asked for the most cherished thing of Lord Shiva. Then Lord Shiva gave him the idol of Shri RadhaVallabh Ji Maharaj from his heart and told him the method of its service. Shri Hit Harivansh Mahaprabhu carried this Idol, which on his arrival at Vrindavan was set up at 'Oonchi Thaur' (High Cliff) (Madanter) on the bank of the Yamuna.

Chief shrine of RadhaVallabh sect, old RadhaVallabh Temple at Vrindavan, though now abandoned but protected monument is in itself a hertiage building and its spectacular  architectural interest is the last example of the early Eclectic style. It was constructed by Sundardas Bhatnagar, a disciple of Shri Vanchandraji, son of Hit Harivansh Mahaprabhu, founder of the RadhaVallabh sect. Wilson noted an inscription over the gateway of this temple, now no longer extant, that it was in 1585, when this temple was constructed. Abdul Rahim Khankhana, the Dewan at Akbar's court, in whose employment Sundardas Bhatnagar of Deoband was, not only got Royal permission to use red sandstone for temple construction, which was till then used only for construction of imperial buildings, royal palaces and forts, but also monetary grant for this temple from Akbar. Descendants of Sunderdas Bhatnagar at Deoband still have these documents with them. It is said that Raja Mansingh first decided to contract this temple. But on hearing a legend that whosoever will construct this temple will die within a year, he backed out. Actually Sundardas died within a year, after he with his personal treasure as well as help from Abdul Rahim Khankhana and Akbar constructed it.

This temple represents a living dialogue between Hindu and Islamic elements in Mediaeval Architecture. The walls having a thickness of 10 feet and are pierced in two stages, the upper stage being a regular Triforium to which access was obtained by an internal staircase. This Triforium is a reproduction of Mohammedan's designs, while the work, both upper and below, it is purely Hindu Architecture. In fact this temple is the last temple in the neighborhood in which a naive was built at all. In the modern style, it is so completely obsolete, that its distinctive name is even forgotten by some architects.

This temple is characterized by its architectural accent on harmony of lines and balanced massing. It reflects constructional unity more than richness of ornamentation. If in any art it were possible to revive the dead, or if it were in human nature ever to return absolutely upon the past, this style of RadhaVallabh temple would seem to be the one for our architects to copy.

On Jumada ii, 972 (8th, January 1565) King-Emperor by a Farman conferred a grant of 100 bighas of Madad-eMash...land to RadhaVallabh temple and the custody of temple offerings emanating from the Emperor, were declared to he under custody of Shri Harivansh Mahaprabhu in viIIage Dosait, Pargana, Mathura. It is the earliest surviving revenue-grant to a Hindu Divine made by Akbar. The grant conferred on RadhaVallabh temple was mentioned in subsequent Farman?s of Akbar, Jahangir and Shahjahan. Previous grant to named person was now converted into grants to temple as institution.

Shri Hit Harivansh Mahaprabhu relished tasting the spiritual nectar inherent in the intimate service of the Lotus like beautiful softest soft feet of Shri-Shri Radha and Shri Krishna in the ecstatic love as a Dearest Associate of the Divine Couple, being incarnation of the Holy Flute (Vanshi Avatar). One could taste the elixir of Bhakti-Rasa by unalloyed devotion dedication and loving intimate service to the Supreme Lord as the Divine Friend of the Divine Consort. The supreme Lord Krishna is only predomination and transcendental recipient of Prema, while Shri Radha is the Predominated Counter-Whole Divinity who alone can offer the supreme enjoyments to the absolute Lord.

So long as one's heart is polluted by sense egoism, so long as one's mind is darkened by a very the quagmire of sex-mindedness, so long as an individual misidentifies his true self with his gross body and his subtle body-mind, intelligence. Ego-there is absolutely no possibility of entering into the depth of the Spiritual Transparency of Shri RadhaVallabh. The conception of Shri-Shri Radha is completely misconceived by most people, and Shri Hit Harivansh Mahaprabhu had shown the path. Who can understand all at once his (Hit Harivansh Mahaprabhu's) method of devotion? With whom the blessed feet of Shri-Shri Radha were the highest object of worship; a most staunch-soul devotee who made himself the page in waiting on the Divine Couple in their bower of love who gloried in the enjoyment of the remnants of all that was offered at their Shrine; a servant who never pleaded obligation or dispensation; a votary of incomparable zeal. Account him blessed who follows in the path of Shri Vyasa's great son, the Goswami Shri Harivansh, who can understand all at once his method of devotion?

Would you know the one point in a thousand of Shri HitJi ways? He adored Radha first and after her Krishna. A most strange fashion, that none could even faintly comprehend save by His favor. He obliterated all distinction between obligation and dispensation; his beloved was in his heart; he lived only as her servant, singing the praises of the divinity night and day. All the faithful know his many edifying and holy actions; why tell and repeat them, since they are famous already. Radha gave him the gracious command publicize my worship among my faithful people, a path for pathless, of high renown, tell them about delights of my sylvan abode. He drank in with his eyes the essence of bliss and gave it to every desirous, dedicated person who supported the cause of female Divinity. Night and day imbibing the honeyed draught of sweet song and cherishing it in his soul, with no thought but for Shyama and Shyam, The soul is enraptured at the sound more than at that of any other name.