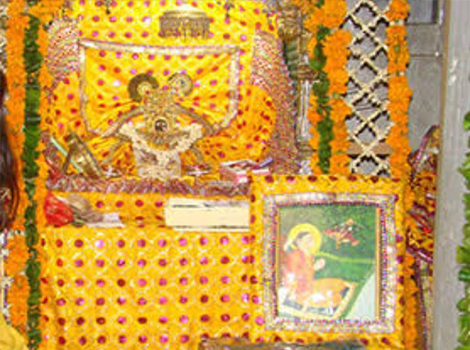 Very near to the Shri Radha Vallabh Temple, towards Holy Yamuna, is Prabhu Vanchandraji ki Dol. Goswami Vanchandraji was the eldest son of Shri Hit Harivansh Mahaprabhu. At this place, Raas Leela anukaran (performance of various divine acts of Shri Radhika ji and Shri Krishna by devotional religious performers) could be witnessed daily. The place is revered by each and every devotee. The place must be visited at the time of Dadhi Kando during Radhaashtami, by the Goswamis. It is from this place that the Lord accompanied by Shri Radhikaji and Her maids ride on the occasion of Holi. 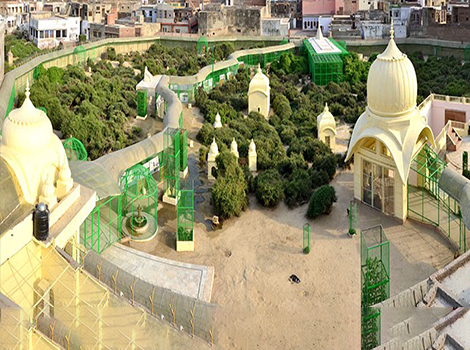 Goswami Shri Hit Harivansh Mahaprabhuji, in 1590 discovered this spot. According to his realization, it is here that Shri Radha Krishna every night performs Raas along with Sakhis (friends). Since then followers of his sampradaye maintain this sacred site and offer daily pooja seva to the presiding deity. It is a depiction of peace and serenity. The walls of the kunj have marbled tiles, engraved with the verses from ‘Radhasudhanidhi’. With stunted evergreen bushes which are regarded to be the sakhis of 'Shriji' in the legends and scriptures, its uniqueness lies in maintaining the time distance for visitors as it is believed that till today 'Sriji' resides there with 'Sakhis' and perform ‘Raas’ (holy dance) at night hours. Evidence (dispersed ornaments) has proved this belief to be true enough to accept. 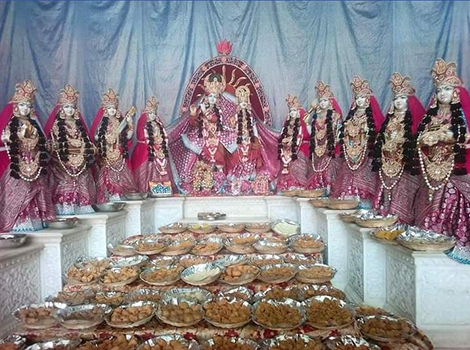 The holy birthplace of Sri Hit Harivansh Mahaprahu. The legend goes that Sri Vyas Mishra was accompanying Emperor on his march from Agra when his wife Tara gave birth to a son at the Royal Army Camp at Baad Gram near Mathura, on 11th day (Ekadashi) Monday of 'Baisakh'(April-May) in the Samvat 1530 corresponding to 10th. This brought significance to Baad Gram and it became a holy sacred place of worship in the coming centuries to the present day.
The geographic location of Baad gram is situated mid-way of Vrindavan and Mathura, the area lies in the rolling fertile plains of north-central India. The general slope of the town is northwest to the southeast towards the river Yamuna. 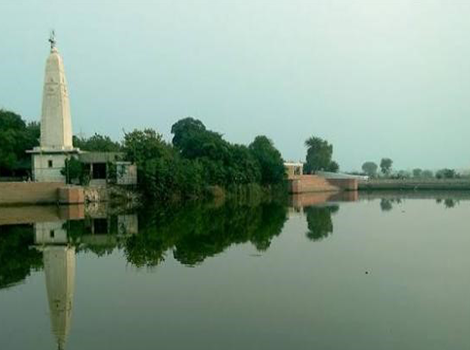 In the nikunj Leela, Sri RadhaKrishna are two bodies but one soul, thus, they can't stay without one another for even a second. But for sakhi's, Sri RadhaKrishna performed the Maan Leela , Maan means 'anger'. This place is called maan sarovara because Shri Radha Rani came here in the mood of Maan. Maan is when Radharani pretends to be angry from Sri Krishna. On learning this, Sri Krishna by mesmerizing talks made up with Sri Radharani. There is a temple on the bank of this lake dedicated to Shri Radharani. 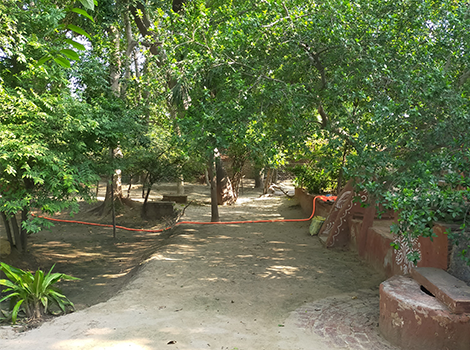 One of the first places, where Shri Hit Harivansh Mahaprabhu reached on his arrival at Vrindavan with Shri-Shri RadhaVallabh Lal ju, is hardly two kilometers away from the Main Temple. In a lush green environment, on the bank of Holy Yamuna, in the Parikrama Marg (circumambulation path), the place has footprints of Shri Mahaprabhu Ji and the original tree where the Lord came and rested under the canopy of trees and creepers.  It is the only place that will provide a referral view to old Vrindavan (500 years ago). 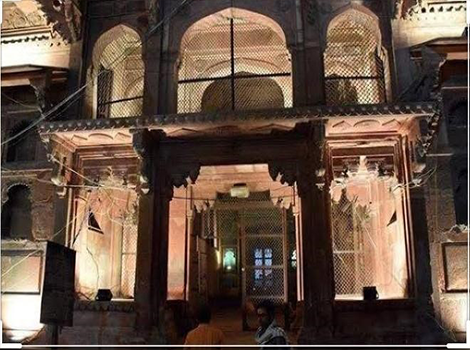 Old Temple, reservedly called as "Shri Hit Mandir" by the devotees, is by the side of the main gates of the present temple. This temple, built-in 1585 A.D in red sandstone, has long attracted favorable attention from visiting archaeologists and art historians.
The old RadhaVallabh temple, a unique architectural fabric of medieval centuries, had three aligned spaces: the inner sanctum (garbhagriha); anterior platform (Jag Mohan); and a long hall with a high vaulted ceiling (mandap). This temple represents a living dialogue between Hindu and Islamic elements in medieval architecture. The walls having a thickness of 10 feet and are pierced in two stages, the upper stage is being a regular Triforium to which access was obtained by an internal staircase. This Triforium is a reproduction of Mohammadian design, while they work, both upper and below is purely Hindu. In fact, this temple is the last temple in the neighborhood in which a naive was built at all. In the modern style, it is so completely obsolete that its distinctive name is even forgotten by some architects.